Energy and money are most precious to determine your strategy on your way through America. With so many coast-to-coast route combinations and a myriad of variables to help or hinder your success, each game is a new journey. Who will be first to reach their destination?

Stay in a hotel for a guaranteed solid night of sleep, or crash for free in your tent; try your luck riding in a peloton of weekend warriors for a few miles, or find a quiet spot to rest your weary body. The choice is yours. 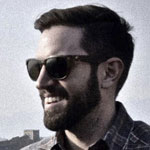 Blair Berg was born in Colorado but almost immediately after his birth his family moved to Nairobi, Kenya as they were continuing their career as international school teachers. From Nairobi, to the Democratic Republic of the Congo, to Russia, and on to Singapore, Blair spent his entire school career as an international student.

It was then when he chose Fort Collins, Colorado as his desired choice to go to university and begin his life in the United States. Once arriving in Colorado his love of the outdoors continued to grow. When he couldn’t be found outside he would be found in a garage fixing up vintage bicycles and Volkswagen buses or playing board games around the dining room table.