In Vejen, you slip into the role of a merchant in the early 17th century. On many trade routes (Danish: VEJEN) connecting villages in Denmark and northern Germany, you need to set up trading houses and travel long distances to buy and resell goods. Those who keep track of the exchange rate and foster their trading network best will win. 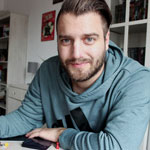 Thomas Nielsen was born on the German-Danish border in 1990. He discovered his passion for board games while studying pedagogy. In his final paper he examined the effects that cooperative board games have on the players. With his head full of theoretical knowledge, in 2016 he set about building and testing his first prototypes. 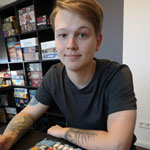 Kai Starck was born in 1993 and has always lived in North Frisia where he was constantly surrounded by board games. His father’s games club ensured a continual supply of various games, some of which made their way onto their living-room table.
In 2016, a fan expansion he developed caught the attention of Jamey Stegmaier (Stonemaier Games) and together they developed Scythe: The Wind Gambit. After that he started to implement his own ideas.

Nielsen and Starck met at a gaming convention and immediately hit it off. While testing the prototypes of each other’s games it quickly became clear that they wanted to work together in the future. 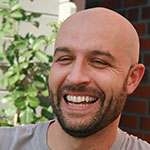 Alexander Jung was born in 1975 in the beautiful Palatinate. In Hamburg, using brush and pen, he trained to be an illustrator and now is settled in Lüneburg with a wife and two children. As a kid he grew up with classic card and dice games. As a teenager and later as a trainee he became a passionate role and board game player. He has now been designing board and card games for numerous German publishers for over 15 years.